It’s made entirely from the left over bits and bobs I had in stash from pairs of socks, a couple of 4 ply shawls and some soft toy creations (and I still have some oddments left but that’s another shameful story 😉 )

Here’s one without Pixie lounging on half of it! 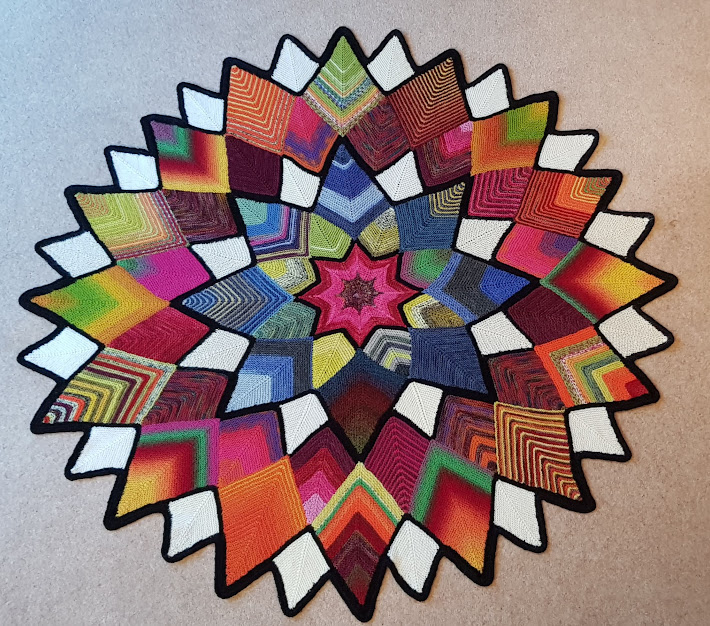 Firstly – do you know what a sock yarn blanket is?? Or why you would need one???

You normally buy 100g of sock yarn to make a pair of socks. This could be a massive pair of size 10 “man socks” or dinky size 4 (my size) Susan socks. As a lot of my socks are for me – at the end of each project I have left over sock yarn…It gets stuffed in an oddments bag…and stares at me…saying, “knit me!”…saying, “you can’t throw me away! I’m too pretty!”…

I had three large freezer bags of sock yarn (after about 20 pairs of socks and a couple of 4 ply shawls)…what to do with these scraplets??

…is to make a sock yarn blanket of little domino squares as you go along. Something like this… (Ravelry – Sock yarn Blanket by Shelly Kang)

This is beautiful but I couldn’t see myself sorting out my colours to make this work. It didn’t “speak to me”. (love the ginger cat at the bottom of the pic BTW Did you notice him?)

My Solution to the Sock Yarn Problem:

I was inspired and excited!!!

I didn’t want a random hotchpotch of colours so I tried to look at what colourways I had… some green…more blues… a lot of pinks and reds…a ton of orange/yellow/red!

So onto starting the pattern, more enthused than I have been about knitting in the last year!!

The first 4 rows, at the centre of the star were an absolute beast to get right – what you see here is my fifth attempt after deciding only a very smooth yarn will do! (I started with slightly hairy yarn – if you can make that work, I swear, you  are a witch!!!!)

Once the central star (the hardest part ) was done, I started the real fun – adding the domino diamonds… 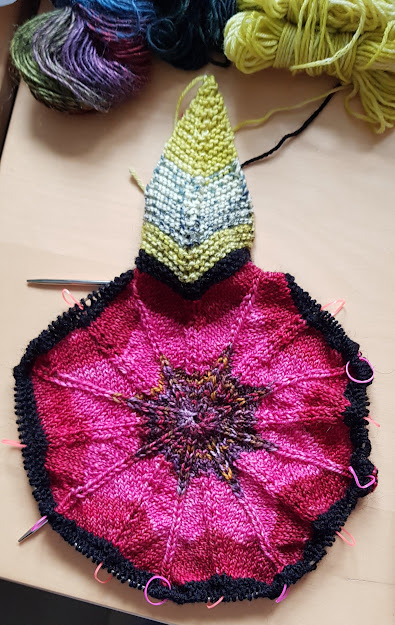 Each of the diamonds is made on picked up stitches or stitches from the black dividing strips and made with nothing more complicated than straight needles and “k2tog” in the centre, either side of a stitch marker.

There is no sewing up in this blanket!!

I quickly built up a star of “greeenish” diamonds, unfurling from the intersecting row of black stitches like opening petals of a flower….

…then some blueish diamonds!

Once I had the white dominos and the black edging done it was time to play with the pinks and reds…. 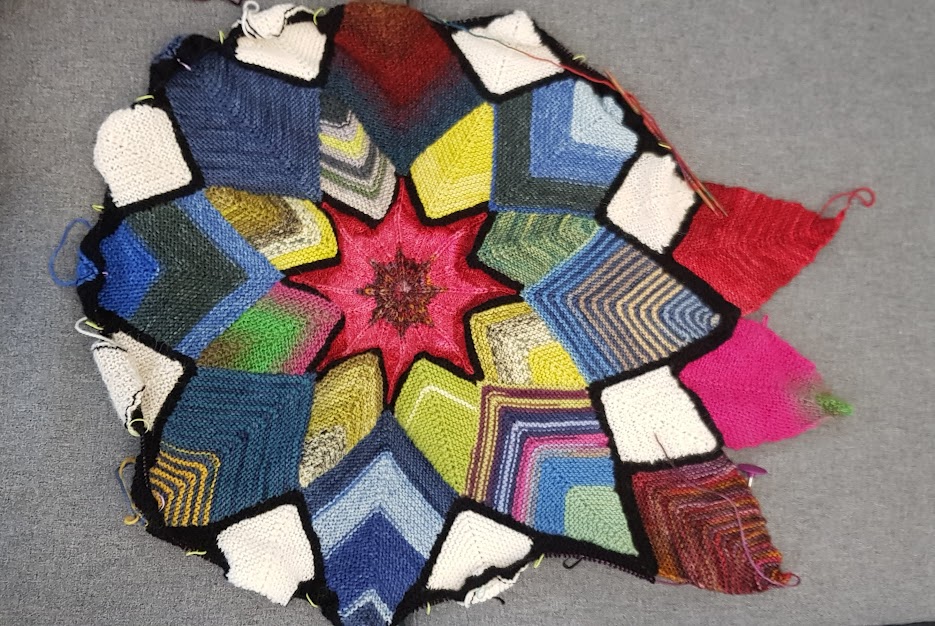 So what did I do when I ran out of yarn?:

As the dominos got bigger it was obvious I was going to use up some of the colours and couldn’t finish entire diamonds with one colour- wasn’t that the point to use up the  scraps??!!

I really started to play with having one  solid colour, alternating  (2 rows each colour) with another variegated colour… or six rows (3 bumps) of each colour, or 2 by 3, or 5 row stripes… It was total “playtime” in every domino!

After the “red and pink” round it became clear that this was in fact a magical blanket… A cat summoning blanket;

Each time I needed too think about a new colour combination, I threw the blanket of my living room floor to look at the colours. Within 20 seconds, Ziggy, Kitty or Pixie would appear and sprawl on the blanket. I swear, they ran clear across the garden to lay on the thing! 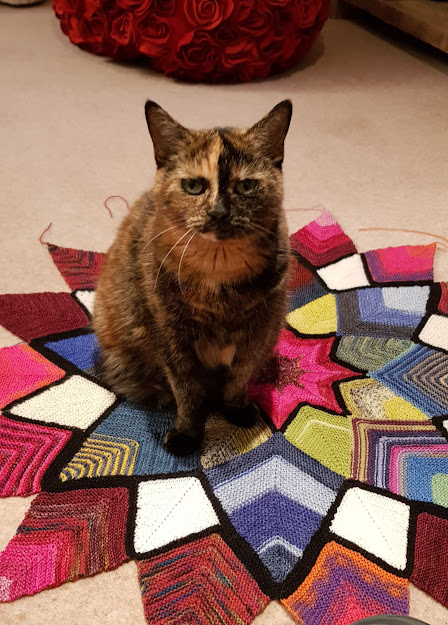 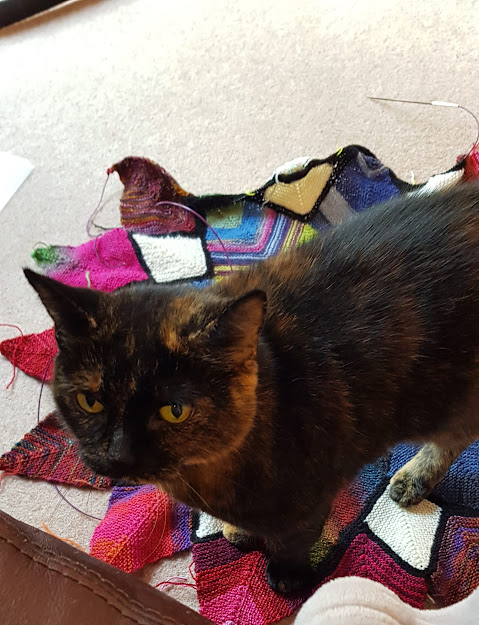 Pixie says, “I’ve got my claws in here. You try and move me, the blanket gets it…”

Working around the entire edge, adding White diamonds as I went and then several rows of black to finish was a gargantuan slog. I had 2 x 100cm interchangeable needles joined with a connector. I fascinated a number of people  of my train commute as they watched me shuffling the stitches painfully around the needles!

It was actually good train knitting – mindless knit or purl for 1700ish stitches!! And I managed to use up black 4ply from 3 different projects!

Where is it now?

The blanket now has pride of place in my conservatory, keeping company with my tartan crochet blanket (which is in surprisingly toning colourways!)

Safe from cat paws – I hope…

This is a fabulous and inspiring pattern and I recommend it to anyone who has a stash of sock yarn, or any other gauge of yarn that is begging to be used up 😀